Researchers are in the comfortable position to be able to choose from a diversity of cloning and expression systems for building complex multi-gene assemblies. Yet, proprietary designs often run contrary to efforts towards standardizing assembly strategies. Some plasmid lay-outs accomodate compatibility, but truly universal systems are hard to come by.

ATG:biosynthetics GmbH has developed a vector assembly system with standardized modular elements that adhere to a uniform design logic. This flexTEC system allows easy modification, exchange, addition, removal and regeneration of components or higher-order gene assemblies. This system has been de-signed with the idea of an industrial standard in mind and has successfully been implemented for multi-gene assemblies in metabolic engineering of bacteria. 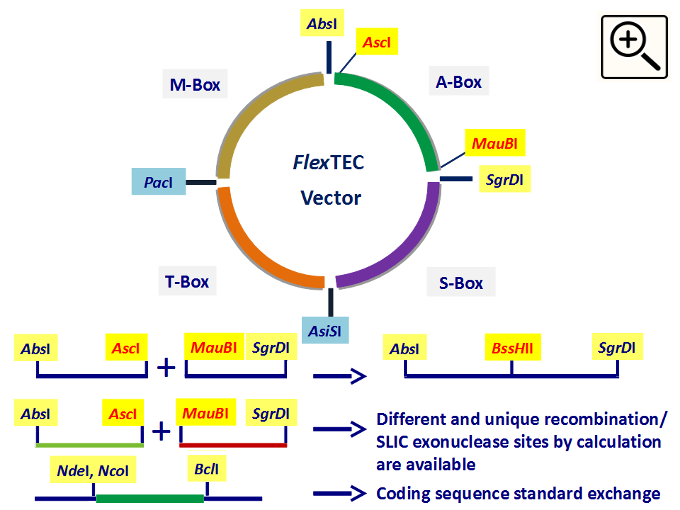 Figure1. FlexTEC - Vector systems for all genetic systems are all pre-designed according to the same basic principle as modular sequence elements which always fit into the sequence context. A-BoX  expression elements are equipped with species specific regulatory functions - into the desired BoX-segment. Transcriptional promoters and terminators or polyA-sites and translational control elements (Shine-Dalgarno, Kozak elements) need to be sequence adapted. Proper initiation function on the RNA-level can be calculated by ATG: EvoMAG ™
SgrDI-S-BoX-AsiSI  selector elements are available for various resistance genes. AsiSI-T-BoXPacI  transfer elements (like: shuttle host oris, oriV, oriT or recombination sites) etc. can be toggle assembled to contain multiple functional transfer elements. The PacI-M-BoX-AbsI(XhoI) vector mainatenance box (ColEI*high copy) can be equipped with alternative oris like p15a, R6Kgamma, RK2 etc.

At present available pre-designed: are all designed according to the same advantageous basic modular principle.

flexTEC advantages: The Toggle vector system allows completely modular exchange of all types of genetic functions (gene cassettes, promoters, terminators, oris, recombination signals, etc.) and can be adapted to and applied for the modulation of any organism's genetic system.
Using a unique standardized and modular vector system that incorporates/covers restriction-ligation, exonuclease and even recombineering-based cloning strategies in vivo and in vitro has the advantage of saving cost and time that streamlines all procedures. The free exchangeability of functional genetic elements (FunGenEs) between researchers/ developers who work with the same standard reduces the redundancy of labor and purchasing costs of genes.

The system is designed as an open standard for the synthetic biology research community but also to researchers in other fields, academic as well as industrial. The standard encourages more intense exchange of parts and modules between researchers.

Modules, especially in the A- and T-Box, can be flexibly exchanged through defined and standardized restriction - ligation cloning. Elements within the individual modules can be added, removed, exchanged in the same way. Toggle comes in different flavors: either as ready-to-use system (for E. coli, insect and mammalian cells) or it can be designed to incorporate customer-specific features or be adapted to your target organism of choice. Customer genes should be optimized to not interfere with the constructive principles of the system. As the modules are separated by rare-cutting enzymes, most genetic design will be easily implementable.

In its basic ready-to-use lay-out, Toggle:


If you want to know more about the system, please download our product description.

Toggle Basic Systems
Currently, we have two ready-to-use versions of the Toggle system (the so called flexTEC line of expression systems). One for E.coli and one for insect cells.
In principle, Toggle can be custom-adapted to any organism that can be genetically modified.